Not too many months ago Terry, the site manager of a local northamptonshire company, called us to say that they were experiencing a heavy rodent infestation in one of their warehouses. Even though they had a pest management system in place, their contractors were not attending frequently enough and were struggling to control the pests and we were asked to take a look at the rodent problem.

It was apparent, on our visit to their facility, that the mice were out of control and were making themselves very much at home, to the extent that staff members were seeing rodents running around the shop floor and offices.

An extensive FREE SURVEY revealed a high number of mouse droppings, nesting materials and urine trails throughout the facility. It was reported by some staff that products and stored stock had been contaminated and damaged by rodents.

Obviously, this was unacceptable for our client and within a few hours of our FREE SURVEY, all of the findings were documented and an urgent plan of action was recommended. The details of the plan were explained to the companies Health & Safety manager. Our joint efforts would enable us to get the situation under control in the safest and quickest time possible.

Due to the type of commercial business we were dealing with, we opted to use several methods of rodent control, with the initial phase of reducing the population of mice dramatically over a very short period. 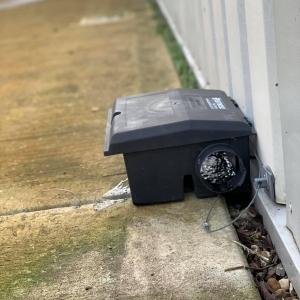 • Tamper Proof stations containing Snap Traps were secured in place.
• A detailed plan of the site was drawn up and the placement of the traps were recorded.
• Station Plaques for ease of identifying the stations were also attached.

The secure traps were left safely in situ for a 48-hour period and then the trapped mice were collected and disposed of.

This process was repeated twice more before a noticeable reduction was apparent. Mice were still being caught weekly but not as many as in phase one of the operation.

Phase two involved setting up a rodent monitoring program, this was implemented with monthly scheduled visits.

In the intervening months the warehouse has been relatively free of rodents and our monthly visits have ensured that any light activity is recorded and acted upon straight away.

• Voids and cracks sealed
• The floors cleaned
• Surfaces were Cleaned and Decontaminated.

Lessons have been learnt from this incident. Proper pest control means implementing the best and most effective methods to deal with current pest problems and anticipating and identifying future problems. Also communication with the correct manager on site and working together with the client, we can ensure the best possible results for any business.

Expansion Across Northampton
Scroll to top